In continuation of our consumer waste series, we examine the challenges faced in the area of plastic waste production and management.

China has a big history with plastic. Throughout its rise to economic prominence, China has manufactured and exported a huge amount of plastic products to eventually become the world’s largest plastic producer in 2013. More recently, China’s domestic consumption of plastics has skyrocketed as well.

As a result of this production and poor internal management, China is also leading the world in terms of plastic waste, specifically the amount of plastic debris contributed to our oceans – already China is responsible for an estimated 28% of the plastic swept into our waterways. With another 300 million urban residents expected by 2025 and growing rates of consumption, it is vital that China acts to more efficiently deal with its plastic waste.

China and the international recycling industry

Tied to China’s plastic exports is the repurposed (recycled) plastics market. As the Chinese economy grows, its demand for repurposed plastic does also. For the past few decades China was buying as much repurposed plastic as possible, especially from the United States. In fact, scrap used to be America’s top export to China with plastic scrap exports reaching $11.3 billion in 2011.

This stopped, however, in 2013 when China started the Green Fence Initiative; it significantly tightened restrictions on importing repurposed materials and other scrap for processing, as well as increased inspections. In the past, China would accept any standard of repurposed material and anything that couldn’t efficiently be processed would end up in Chinese landfills. Although profitable, this practice resulted in mountains of waste developing within China, posing both environmental and health risks.

The United States now faces a huge surplus of plastics, as China will only accept the least contaminated of materials. As it stands, even with a seemingly endless supply of usable plastics, domestic American recycling firms are losing money processing the materials that they would normally send overseas. This means much more plastic waste in American landfills until the proper investments are made in recycling infrastructure, but for China it means lower levels of non-domestic waste entering the system.

The changing nature of plastic consumption in China

Despite receiving less international plastic waste, China is making up for it domestically. With the rise in affluence, China is now consuming much more plastic.

Per capita consumption of plastics more than doubled from 22 kg in 2005 to 46 kg in 2010. This is still far behind those of developed nations such as the United States at about 170 kg per capita, but, nonetheless, it is growing exponentially.

Some of the major sources include:

Although the obvious benefits that plastics provide cannot be denied, we cannot be blind to the obvious disadvantages. A fundamental quality of plastic is its resistance to degradation in any environment, and this quality is made most evident in the world’s oceans.

Asia is leading the rest of the world in plastic debris dumping, but even among the top 5 worst offenders China is far and away the prime perpetrator with almost 5 billion pounds of plastic waste contributed to the ocean in 2010. 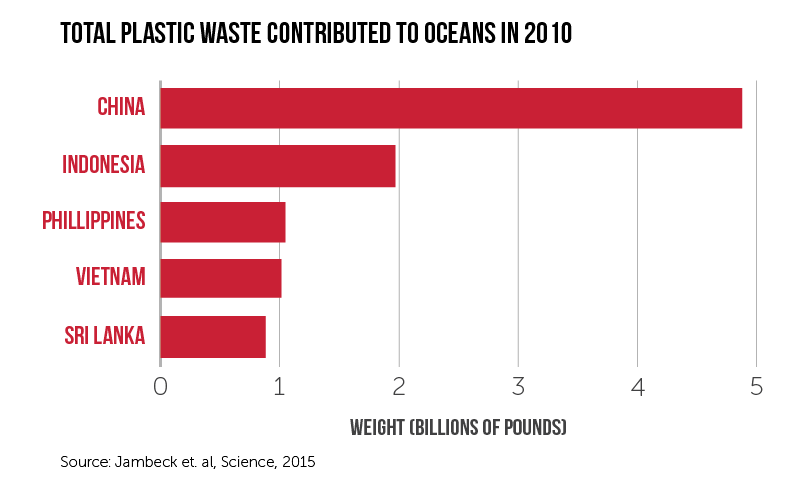 The waterways have become so saturated with plastic that even Chinese Sea Salt has become contaminated. Plastic particles, usually no larger than .2 millimeters in diameter, have been found in table salts all across China according to a study conducted by East China Normal University. These plastic particles, also referred to as microplastics, are especially malicious because of their ability to absorb other harmful contaminants.

Besides microplastics, plastics are now present at virtually every level of ocean ecosystems. They are ingested by large amounts of marine organisms, especially those that comprise the international seafood industry. And this means, of course, that we too are at risk of ingesting this plastic through the food chain.

A waste system at its peak

Asia, and China specifically, are contributing so much waste to the ocean for a number of reasons:

We can see that this problem is only growing, with China estimated to more than double its annual output of plastic waste by 2025. 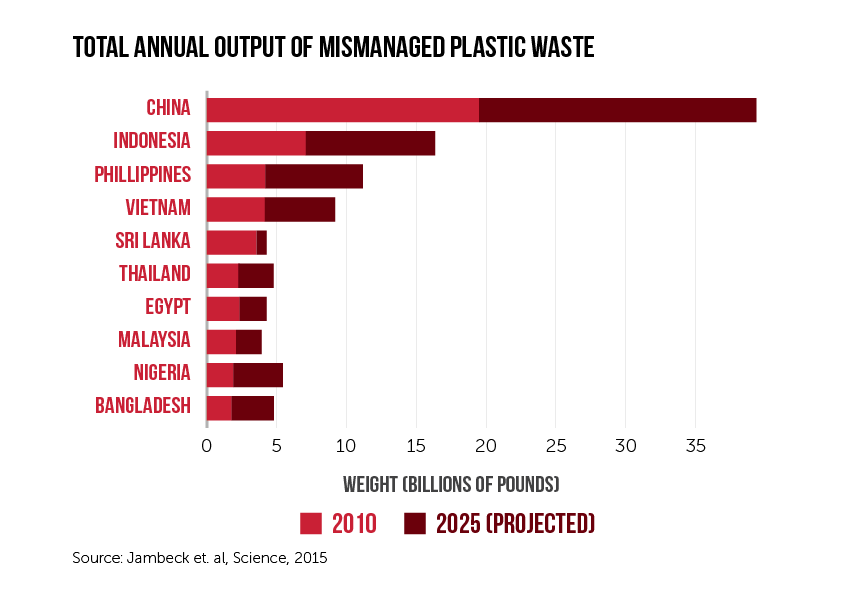 Working towards a real solution

Plastic waste is very much an international problem, but targeting the main five contributors, Vietnam, Thailand, the Philippines, Indonesia and especially China would help to reduce global plastic waste runoff by as much as 45% over the next ten years.

A report released by the Ocean Conservancy in September discusses some of the viable options for reducing our plastic debris runoff in the future. In general, there are some major steps that must be taken to reduce the debris in our oceans:

These steps, when taking together and with long-term vision, have the ability to stem the problem of plastic pollution. Not only that, but they will bring us closer to the principles of the circular economy that truly allow for value to be utilized out of the waste stream. This, of course, requires all of the various stakeholders to work together to create the incentives necessary for this to happen.

With real solutions such as these, we can continue to enjoy the benefits of plastic use whilst working to maintain the health of the environment and iterate to develop better future solutions.

For more articles on this topic and other related topics, check out our recent posts (below), and don’t forget to follow Collective Responsibility on social media to receive updates on our latest articles, reports, and events.

3 Responses to Plastic Waste In China