Among numerous global controversies ranging from politics and economics to climate change and energy, one critical issue has fallen out of view of the public eye, until now: the impact of an imminent, graying population.

According to the recently released U.K. autumn statement, analysts and the mainstream media have raised concerns towards the future stability of social care. Specifically, elderly care could face a “collapse” in the near future due to social care budget constraints.

The U.K. as a country faces an elderly dilemma, and it’s not alone. It’s not even the most severe example of a graying population.

China has faced the same problem to an even greater degree, on an even greater scale, and with even greater economic limitations. In fact, Collective has published not one, but two reports on exactly that: China’s elderly challenge — and opportunities for private actor intervention.

In this analysis of China and the U.K. as graying powers, we highlight connections and comparisons between their elderly social care systems and future complications. We then draw from our reports to outline a three-tiered opportunity for private actors to enter and activate a growing, untapped market: infrastructure, services, and technology.

GRAYING POWERS: WHAT IS AN AGING POPULATION?

Before we dive into potential private actor solutions to a social problem, we need to understand the social problem and context for the issue in China and the U.K. What makes an elderly challenge?

When the proportion of seniors in a population outnumber that of the working, younger population, a country encounters an elderly dilemma – a graying population that can have long-lasting consequences for the population as a whole.

In China, with over 202 million people over the age of 60 as of 2014, the aging population is a result of the One-Child Policy from 1978. As fertility rates among Chinese families dropped, the elderly proportion has almost doubled from 7.18% to over 15 % of the population in recent decades. Despite the One-Child Policy being lifted in 2015, the lowered growth of newborns to the population has created a population “bulge” that will continue to persist for the near future.

Due to low birth rates from the One Child Policy, China’s population a bulge in the elderly demographic – which creates the dilemma of a graying population.

In the U.K., a similar elderly challenge is emerging, as over one-third of the total UK population is aged 50 years or older (23.6 million people) – and the proportion of the U.K. population over 60 years old is now higher than that of those under 18.

One direct impact of a graying population is the economic strain it places on the younger working population, the retired elderly generation, and government spending. Both China and the U.K. need to find the ideal solutions to meet the economic challenge head-on.

With government spending already limited, the increased demand for seniors’ healthcare, housing, and other services places tight constraints on infrastructure. While funding for programs and services can be redistributed to an extent, graying populations create economic complications from the shifting balance between human productivity and costs.

One measurable area of this economic pressure is the shifting demographics of the workforce. In China, as the proportion of working-age individuals decreases, the proportion of seniors retiring rises – which can negatively impact capacity for labor and innovation. 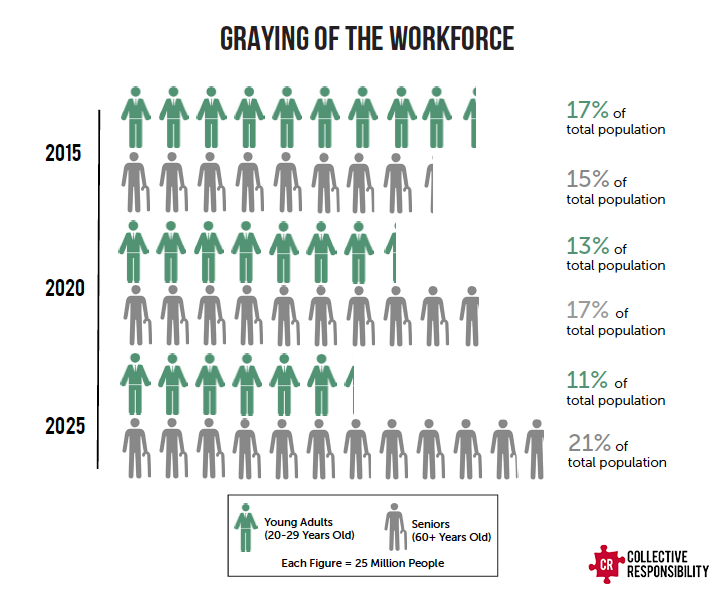 The demographic reversal in the U.K. is compounded by the fact that, among the 10.2 million older working-age individuals (aged 50 until the state pension-age – roughly in the 60s), 28% are unemployed or choose to retire earlier.

With mounting pressure on working adults shifting to the younger populations, China and the U.K. could face separate economic challenges on the international scale.

As the massive, young, and inexpensive workforce that powered China through its past economic boom starts to shrink, so could China’s competitiveness in the global market. Meanwhile, the U.K. is preparing to step into the unknown territory of Brexit, and an already stunted workforce of young, domestic workers combined with the decreased entry of immigrant workers could hurt productivity as well.

Domestically, however, both powers face more tangible burdens of limited infrastructure and human resources. For example, the healthcare sector faces the issue of “bed-blocking,” where seniors entering hospitals for treatment are forced to stay longer than anticipated due to few alternatives to continue recovery elsewhere. Not only does this create higher costs for elderly treatment, but it limits medical facilities’ capacity for treatment for the remaining population.

Aside from the lack of actual beds and physical resources, the human resources in healthcare become overburdened, underpaid, and ill-prepared to meet the increase in demand for services.

To address at least some of the economic challenges of a graying population, China’s government currently operates under the “Nine-Seven-Three” policy, which suggests: 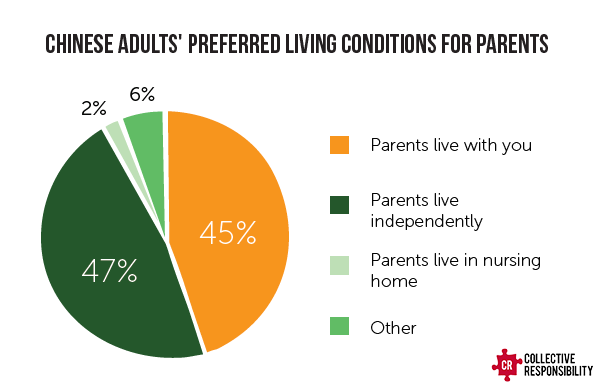 However, as rural Chinese youth increasingly move to cities or look for employment in other countries, the practicality of the Nine-Seven-Three Plan could come into question in the next couple decades. Additionally, such as solution is even less viable in the U.K., which doesn’t necessarily have the same cultural context of a 3-generation family.

Asset-based opportunities for senior care in both China and the U.K. can address the physical, infrastructural needs of the elderly. If a greater initial capital investment is available, private actors can serve visible and tangible needs by constructing and supporting facilities like nursing homes, clinics, and even community recreation centers.

By offering elderly-specialized clinics and centers, private actors can excel where public sector resources have barely managed to succeed in the past. There is even a growing market for luxury elderly institutions to serve the middle class that has growing expectations for above-and-beyond quality, as well as rising disposable income. 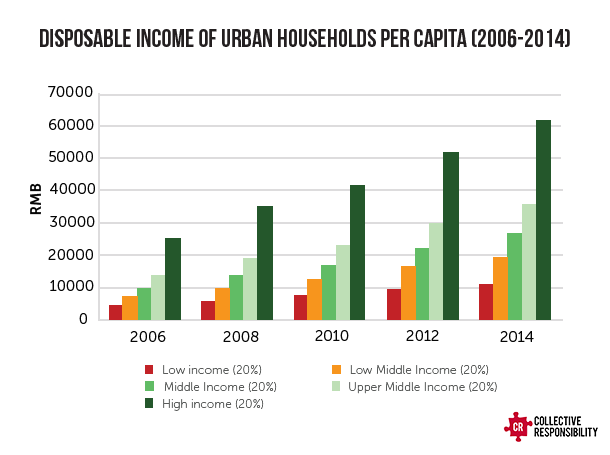 Private actors can take advantage of the many service-based opportunities in elderly care, ranging from home assistance to travel, cultural enrichment to education. Although market competition in this area is higher than in the asset-based industry, offering trustworthy, cost-efficient services to the senior population can be a more adaptable option.

For example, many seniors in both China and the U.K. welcome the opportunity for education, seeking to expand their knowledge horizons post-retirement. In the U.K., 20% of 65-74-year-olds and 12% 75 years and older consider themselves “learners”. And in China, the demand for elderly education is clear, with over 50,000 learning institutions dedicated to seniors across the country.

One of the most promising areas for private sector actors to address the needs of the elderly is through technological innovation. With innovation and problem-solving accelerating in the modern age, private actors have the potential to revolutionize and improve the lifestyle of the elderly by serving both core needs and leisure wants.

While not all seniors in China are quick to jump into the latest in tech advancements, private actors can hit the “sweet spot” for market activation for the elderly demographic. And there are signs that seniors’ receptiveness of technology is even higher in the U.K.

To learn more, check out our case study on Tech in China: Activating the Elderly, in which we survey, interview, and examine barriers to smartphone ownership – and the opportunity for meeting a growing market. 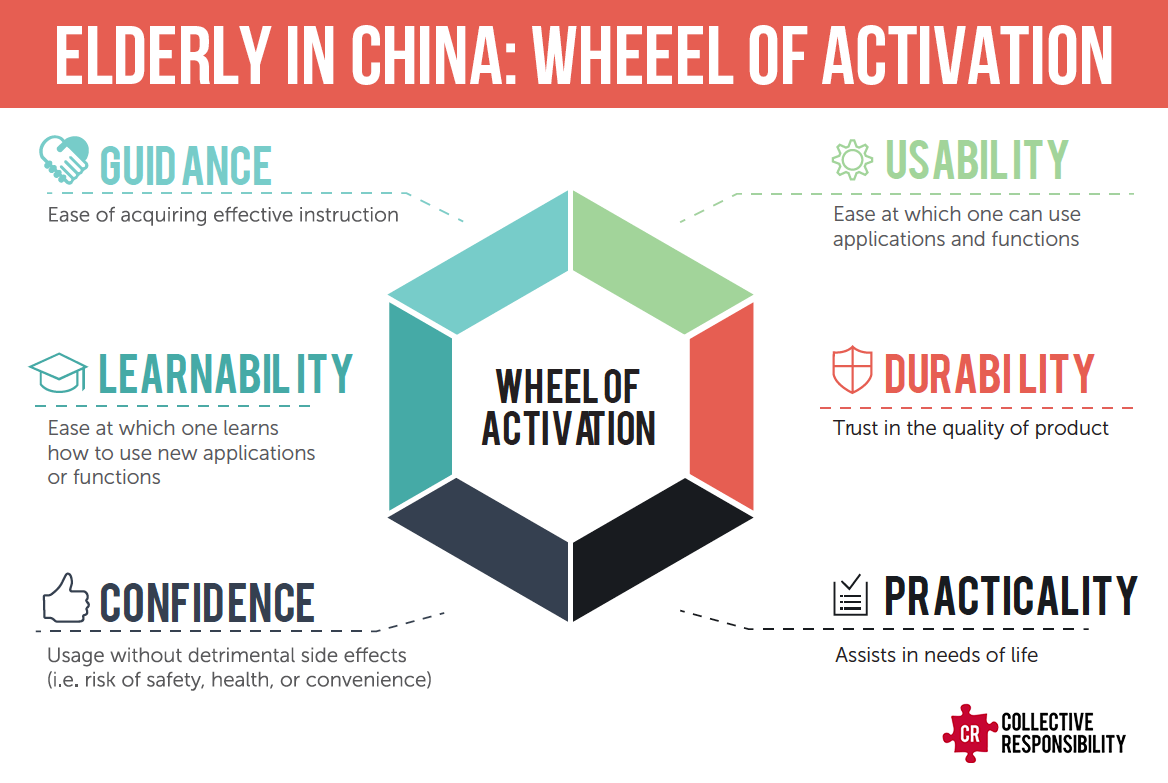 Getting In on the Ground Floor

China and the U.K. serve similar roles on this issue by the precedent that they set as global leaders. China stands as the most populous city in the world, with population challenges at a scale only comparable with India, and is therefore forced to solve problems quickly while other countries have the luxury to delay.

Meanwhile, the UK operates as a leader in the Western world, comparable to other powers like the U.S., and is the first and only country to withdraw from the EU through Brexit so far.

The private sector can and should take the examples of China and the U.K. as opportunities to fill a need. Graying populations will become a universal issue, and those who step into the market for solutions early will reap the rewards.

To learn more about the Elderly in China and opportunities for Activating the Elderly, check out our reports. Be sure to follow us on social media to receive the latest updates on new articles, reports, and events!

This article was written by Gabrielle Williams, Research Analyst at Collective Responsibility.