In China, while the pressure of economic growth on the environment has been well documented, over the last few years, there have been a number of pilot and campaigns (nationally and provincially) to identify and reduce pollution at the local level.

Since Chinese Premier declared “a war on pollution” in 2014, China has set up plans and targets for cleaning up its air, water, and soil. Last year, it passed toughest-ever environmental protection law, announced a ban on waste imports, launched a carbon-trading market, and kicked off an inspection campaign that disciplined 1,140 Chinese officials. On 1 January 2018, China’s Environmental Protection Tax Law (hereafter referred to as the Law) entered into force, aiming to further rein in polluters.

Starting from this April, mainland factories will be taxed for producing noise, air and water pollutants, as well as solid waste, although the levy may vary by geographic locations. In order to incentivize energy efficiency, green investments, and innovations, the State Council, China’s top administrative body, allows provinces and municipalities to set their own tax rates based on the region’s environmental, economic, and social contexts and to fully allot the tax revenues for environmental protection measures.

Why a tax now?

The environmental tax isn’t China’s first broad-based use of pricing instrument to reduce environmental damage. In fact, a pollutant discharge fee system was introduced 40 years ago, aiming to curb the pollution by internalizing the environmental costs in the business. By the end of 2017, the country has raised discharge fees of more than RMB 22 billion (US$3.38 billion) from nearly 330,000 enterprises, up by 12.3% from 2016. However, some local authorities exploit loopholes in the system, deeming it a sheer source of government revenue or exempting enterprises which contribute a high proportion to fiscal money. Moving toward a tax regime is expected to fix problems underlying the previous scheme and effectively influence the behavior of producers and consumers. 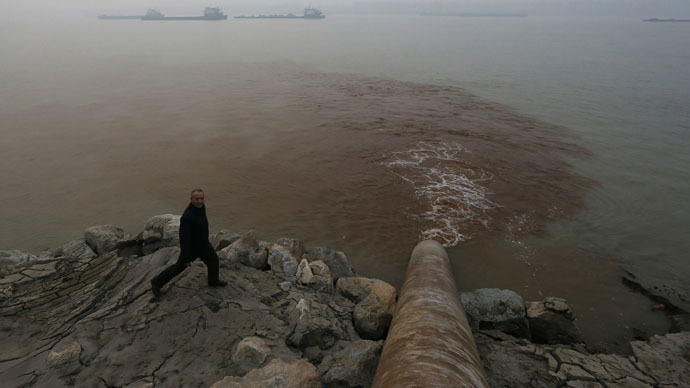 The Law also serves Beijing’s best interests to protect the environment. The Chinese leadership sees pollution control as one of the three “critical battles” needed to win in three years (the other two are financial risks and poverty). In the realm of environmental policy, a green taxation is a relatively favorable tool, adopted by roughly 55 countries all over the world. As demonstrated in Denmark, Canada, and Japan, such taxes provide price signals that can trigger a market response across the entire economy, forcing industries to shift to less contaminated ways of production, either by preventing and controlling pollution or by switching to clean alternatives.

But the timing of implementing the Law is equally important as its content. The economic growth in modern China stems from the low-end manufacturing, which is gradually losing its competitive advantage to markets with lower labor costs and looser regulatory environment. Recognizing this trend, the Chinese government has been pushing for a transition “from a rapid growth model to high-quality development.” In the process, policy support will be geared toward services and consumption, as well as green and low-carbon industries like energy efficient buildings, smart transportation, and renewable energy.

The knock-on effect on other industries is inevitable.

So how does the environmental tax fit in this formulation? First, it helps China speed up the transition of manufacturing industry by bolstering a market that is conducive to fully regulated, more technologically advanced, and more environment-friendly businesses. The increasing costs of emissions will also drive up demand for pollution control and spur innovations in new technologies and processes. Second, the Law is of good use to cutting excessive capacity. If the government continues elevating tax levels, companies without proper equipment and facilities will be phased out as costs far exceed benefits. Industries like metal and steel already feel the shake-up given their low margins.

Enterprises, entities, other producers and operators that discharge taxable pollutants directly to the environment within the territory and other sea areas under the jurisdiction of PRC.

The Law sets out the taxable bases (e.g., a pollution equivalent quantity for air/water pollution that takes into account, alongside volume, the harmfulness of the pollutants, and the public cost of dealing with them) and the range of rates that may apply. On air pollution, the tax rate may be imposed at up to 10 times the base rate of RMB 1.2. On water pollution, the levy range is RMB 1.4-14 per unit. Local governments can determine the rate within the range if approved by the central government. Taxes on solid waste are between RMB 5 and 1,000 per tonne, depending on the type of waste.

Tax rebates apply where pollution levels fall below national/local benchmarks by specific percentages: Where the concentration value of the taxable atmospheric or water pollutants emitted by taxpayers is lower than the nationally and locally stipulated pollutant emission standards by 30%, only 75% of the environmental protection tax will be payable. Where it is lower than such standards by 50%, only half will be payable.

Those who are exempted from the environmental taxes include:

Punishment for evasion or fraud is yet specified. Enterprises and entities that discharge pollutants illegally will be held accountable and subject to the penalty based on the tax law and the environment law of PRC.

So far 31 provinces, municipalities, and autonomous regions have released their respective tax rates and standards. But not all feel comfortable fully rolling up the tax scheme for fear of stifling local economy. Those under greater political pressure to clean up the smog like Beijing, Tianjin, and their surrounding regions, have set relatively high rates. In contrast, other provinces have opted for lowest possible rates considering the lagging economy and the ability to pay of enterprises, like the heavy industry hub of Liaoning and coal-mining center of Shanxi.

While the success of the Law relies heavily on how well it’s been executed, there are several hurdles of its implementation.

The Law is going to strike industries that contribute the most to the air and water pollutants, solid waste, and noise in China, such as coal-fired power, steel, cement, aluminum, construction, mining, chemicals, petroleum, pharmaceuticals, paper, and textiles.

In particular, the following industries will face mounting pressure.

Within these industries, small to medium-sized companies are also clearly identified as targets for the tax.

With the law only going into effect January 1, it is still too soon to ascertain what the full impact will be, but even were this effort to fail it would likely only lead towards more market-based mechanisms to tackle the environmental issues.

In response, business needs to be prepared, evaluating the financial and operational impacts of the new levy, factoring the impact in their strategies and business plans, and promoting processes and technologies that can reduce, recycle, and reuse the waste materials.

If the Law fails to change business behaviors, governments will tax higher, companies will pay more, and the environment will end up getting worse—everyone loses.

For more customized impact assessment and strategic advisory, contact us at [email protected].