Although International Women’s Day 2018 (Mar 8) has already passed, we believe it’s never too late to celebrate women’s achievements and examine the push forward of gender equality in the context of China’s sustainable development. With the theme for 2018’s International Women’s Day being #PressForProgress, we wondered if #IWS has lost its meaning in China as there seems to still exist such a low awareness and consciousness for the challenges that women face.

At the macro-level, many argue that women in China have been powerful mobilizers and enablers of economic opportunity. After all, China reportedly has the largest number of self-made billionaire women in the world. However, the progress for women and gender in China (aka “WAGIC”) is something that is still up for debate as there is the lack of female representation in politics and business, discrimination in education and the workforce, gender pay gap, etc.

To learn more about women in the workforce in China, we attended the AmCham Shanghai Women’s Executive Network 2018 “WeForShe: Beyond the Numbers” event on March 2nd. We were glad to see that issues of supporting inclusion, raising awareness of unconscious bias, and the advancement of women in the workforce were discussed. However, we were disappointed that when attendees raised questions around gender inequality and female discrimination in the workforce and government, social pressures, and stigmas, etc., these admittingly hard to answer questions were never directly addressed by the panel speakers.

According to a 2015 MGI study, they found that China’s four main gender inequality issues are: 1. low share of leadership positions, 2. high levels of unpaid care work, 3. high political inequality representation, 4. the sex ratio at birth (which remains at a 1.170, which the global male-to-female ratio is 1.086).

Sexism and gender discrimination are particularly profound in professional life for most women in China, where it is commonplace for employers to ask women if they are married, or plan to marry if they plan to have a child, and now if they want to have a second child. Some employers state in their job announcements that they are specifically not considering women for certain jobs in many industries in China, despite there being gender anti-discrimination employment laws. These are clearly indicators that the enforcement of laws is still a challenge.

Many governments recognize that women are their country’s greatest untapped resource and hold the immense potential to contribute to the economy. China, for all the challenges that do exist, does understand that economically speaking, closing social gaps and gender parity is an opportunity for the nation – particularly with the government’s plans to build a knowledge-based economy.

According to the 2015 MGI study “The Power of Parity,” if women were allowed to be as productive as men, China would unlock a productivity gain and see a potential economic boost of USD $2.5 – 4 trillion in 2025 (which would equal a 12-20% growth in China’s GDP). Currently, women in China have similar access to essential services as women in developed economies but experience higher gender gaps when it comes to working equality.

But how to get there is the million-dollar question. 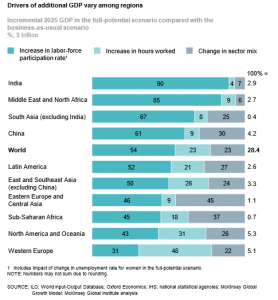 The Burdens of “Worklife Balance”

Gender inequality is an economic and social issue as it’s tied in with demographic problems such as China’s rapidly aging population, falling birth rates, issues of social stability such as workforce productivity, and economic development. There are several pressures that China’s women are facing, including balancing educational attainment, workforce participation, financial pressures, family building and caring for elderly parents.

According to another McKinsey global study Women Matter, 44% of male and female managers in China responded that the biggest challenge women leaders face is balancing the “double burden” of domestic life and career. More than 63% of mothers of two who responded to the 2016 Second Child Anxiety Index Survey (二孩焦虑指数), indicated that they have no plans for their career paths and felt helpless about the future as the opportunity costs of childbearing are so sensitive to the timing of employment interruptions, many women worry that having children would significantly impact their career development.  Since the introduction of the Two Child Policy, China has seen a drop in half a million births, which may be due to several factors, but what’s undeniable is that social, financial and professional pressures have more obviously influenced women’s willingness to give birth and child-bearing behavior. Meanwhile, China’s Elderly Rights and Security Law states that children and their spouses are legally obligated to provide maintenance and support to the elderly (assuming this is anyone of retirement age), which includes medical expenses, housing, etc. adding to more pressures for couples.

“The Grey Wall of China”

If finding equality, and success weren’t hard enough already, mandatory retirement ages are earlier for women (55 years old) than men in China.  This “Ladies First” principle contributes to shorter career lifespans and inhibits women from attaining equal working conditions as men, as well as reduced pensions and fewer social security benefits for female retirees. In China, the female-to-male labor force participation ratio is 0.64 for those 55 or older but is around 0.84 for those of prime working age. (See our report on Elderly in China).

This is another challenge, particularly for those whose executive advancements may be curtailed due to the perceived lifetime value of a female executive against her male counterpart.

While only 1 woman (Sun Chunlan) out of 25 members in the Politburo is female, it is reported that China has the largest number of female self-made billionaires and entrepreneurs.  Furthermore, there are increasingly more female business leaders in China, and now we are seeing the emergence of some female-focused investment firms such as Ellevest (which has the motto “Invest Like a Women”), the SHE-ETF (exchange-traded fund) by State Street (which filters out companies with a “gender-lens” and focuses on companies with women in senior management positions), or BBG Ventures and other firms that fund female-led companies. A survey by Morgan Stanley recently found that 84% of women said they were interested in sustainable investments, or making investment decisions based on their values, targeting social and/or environmental goals alongside financial returns. According to the 2018 Economist report, several studies show that companies perform better with women in senior position positions. Thus, showing that there the opportunities do exist for women to break through the glass ceilings and there is a trend of rising women’s wealth and power in businesses. (See our blog about the investment community driving leadership in sustainability and impact investing platforms).

Some of the more notable female business leaders in China include:

Contact Evelyn [email protected] for more information on the topic of integrating sustainability into business strategy and measuring social value.