After its astronomical rise to the world’s largest economy in terms of purchasing power parity (PPP) over the last 35 years, the Chinese economy is experiencing a major transition from a manufacturing-based to a service-based economy. In 2015, the tertiary sector climbed to 50.5% of total gross domestic product (GDP) while industry continued to fall to 40.5% of total GDP. While this economic transition is crucial for the Chinese economy to grow sustainably, it displaces a considerable number of workers in the industrial sector.

In the first half of 2016, the Chinese government declared its intention to reduce the state workforce by 5 to 6 million people over the next few years. Specifically, China plans to lay off up 1.8 million workers from the coal and steel industries. With economies based on heavy-industry and coal mining, the three provinces in Northeast China (Heilongjiang, Jilin, and Liaoning) have been particularly impacted by the economic shift away from industry. The entire region has experienced an economic downturn along with either stagnating or declining rates of mining employment. Of the three, Heilongjiang has been most negatively impacted, as its mining employment decreased from 488,000 people in 2008 to 359000 people in 2015 (a 26.4% decline). In fact, Longmay Group, the largest coal company Northeast China, announced in late 2015 that it planned to eliminate 40% of its workforce across 42 mines in four cities, which involves up to 100,000 workers. 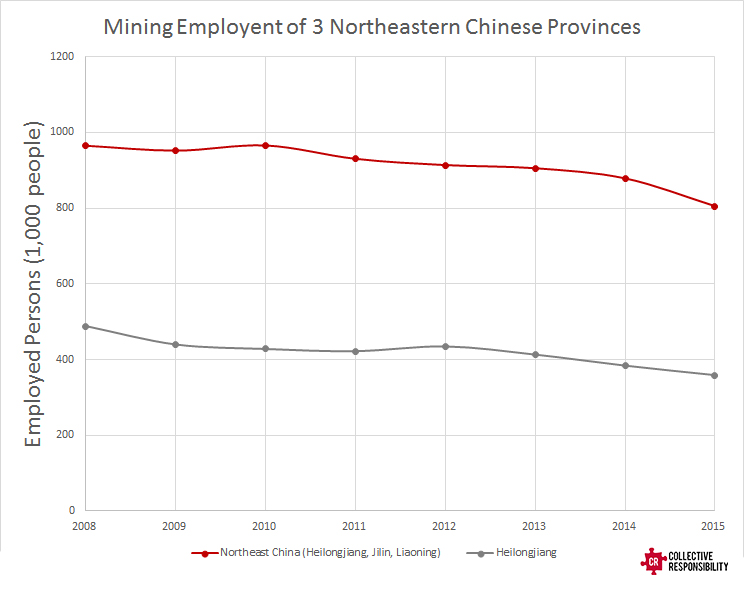 Regional Concerns for the Future

Over the last decade, the ghost town of empty factories in Northeastern China has steadily expanded as more and more businesses have moved out of the region. Consequently, the three provinces experienced economic downturns and stalled urban development. However, what is most worrisome for the local people is the lack of a prospect for future economic growth. While many of the younger working population have migrated, either southward or abroad, their older counterparts have neither the transferable skills nor the resources to retrain for another industry. In addition, it is difficult for entire families to migrate because of the current hukou system. Finally, many are hesitant to leave the areas that they have lived their entire lives to go somewhere foreign.

The economic slump in the Northeast coupled with bleak prospects for future improvement should constitute an area of sizeable concern for the Chinese government. Since the Chinese government earns legitimacy through economic prosperity for many people in the region, the current economic situation will foment continually larger levels of social unrest. A 2016 coal miners’ strike in Heilongjiang illustrated the urgency of the issue. Reportedly, a particular striker lamented “I’m on my knees, my family can’t eat… tell me, how can we live?” While the Chinese government has earmarked money for severance payments and to help the displaced workers find new jobs, some experts have deemed it a short-term solution. As we look to the future, it is essential for China to find a sustainable strategy help diversify the economy of the Northeast in order to quell social discontent and improve the standard quality of life in the region.

This article was researched and written by Tim Wang, Research Analyst at Collective Responsibility.