Serious water crisis due to never-ending drought struck São Paulo and, consequently, the city faces a massive problem to quench its 20 million citizens’ thirst. Similar situations are affecting cities around the world, including many Chinese cities. For nearly half a century, the capacity and number of rivers in China have decreased significantly, with a 50% reduction due to the diversion of water for agriculture and industrial uses. As a result, rivers in China are failing to deliver clean freshwater from their western glacial headwaters to urbanized regions along the way. Coupled with this, regions along the northern coast depend on the Yellow River and its water source, which are on the verge of running dry. 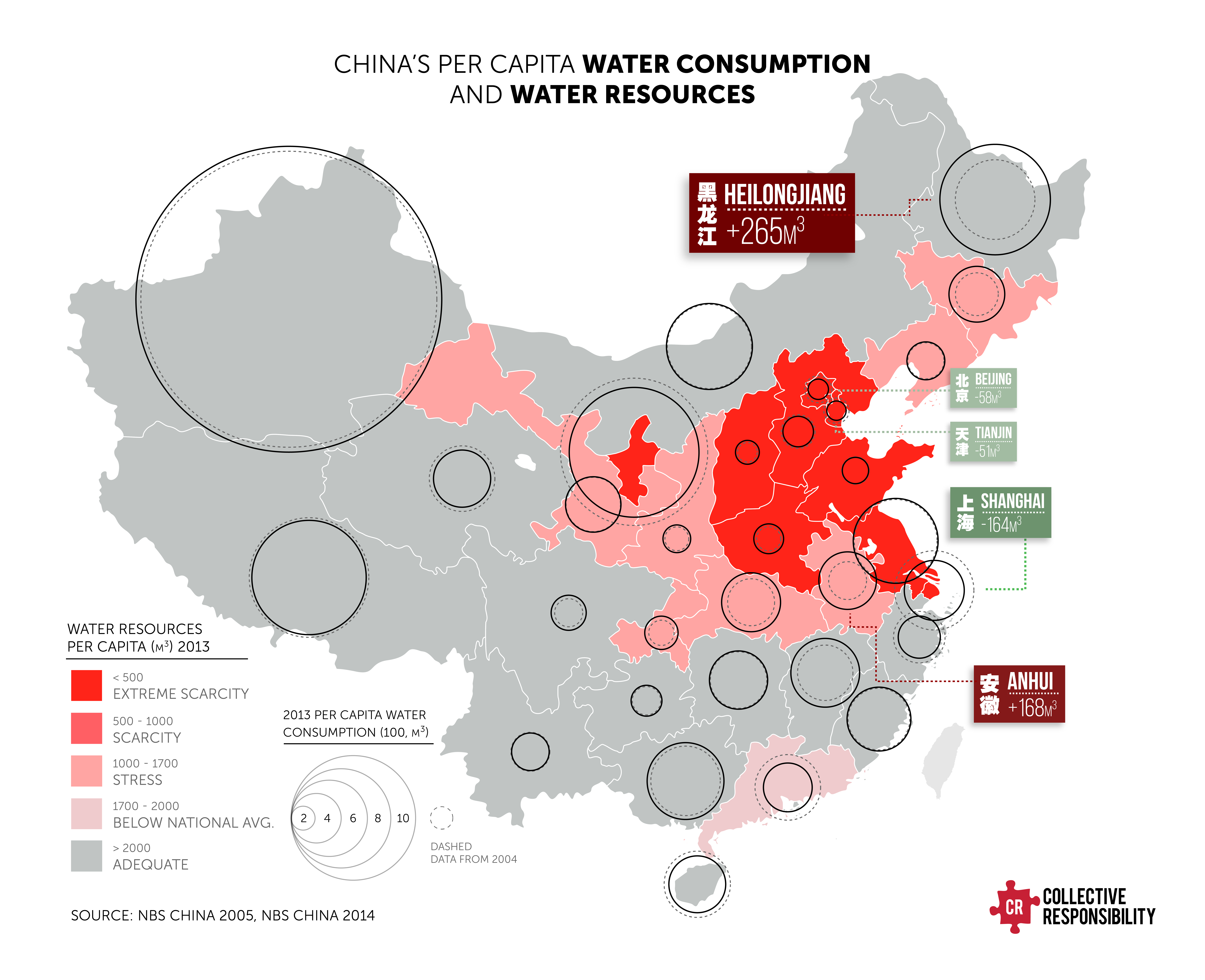 Three in five megacities are using more water than they have.

A megacity is defined as having a population of more than ten million. With five rapidly expanding megacities, China faces a massive water crisis in three of them. Shanghai, Beijing, and Tianjin, with a combined population of over 57 million, are water stressed. Net water per capita (water resources minus usage per capita) in these three cities is negative, meaning they use more water than available.

The primary cause of the unsustainable use of water is that these cities’ populations are increasing at unprecedented rates and, as a result, water consumption is accelerating. Furthermore, Beijing and Tianjin are located in the historically water-scarce North, and Shanghai’s industrial sector extracts a tremendous amount of water. With exponential population increase, limited water resources, and its unsustainable consumption, water depletion is a serious concern for China’s urban population.

What would happen if China’s megacities run out of water?

São Paulo proves that the cause of such a serious water crisis is due to poor and shortsighted management from the government. Despite multiple warnings and frequent droughts over the past decade, there have been significant deficiencies in water conservation infrastructure. In addition to unsustainable use, water resources in São Paulo are managed as a for-profit business. The city’s 20 million residents now face the possibility of an imminent citywide infrastructure collapse and evacuation.

This same scenario applied to Shanghai, Beijing and Tianjin would have devastating effects, due to an economic halt and massive relief expenses. Consequences would be serious with little access to clean freshwater. The quality of life would rapidly decrease as healthcare, sanitation, and sewage fail to meet acceptable standards.

Potential reactions to such a situation can be divided into two categories:

Unlike São Paulo, the Chinese government is aware of water shortages in Northern China. In 1952, Mao Zedong stated, “water is plentiful in the south, scarce in the north; if possible, it would be good to borrow some over”. This vision succeeded over the past half-century through the South-North Water Transfer Project.

Through extracting water from different parts of the Yangtze River (upper, mid-, and lower streams), three routes (western, central, and eastern) were planned to divert water to the parched North. Two of them, the eastern and central routes, became operational in November 2013 and December 2014, respectively. However, the eastern route takes water from the lower Yangtze, which Shanghai depends heavily on. Accordingly, it is arguable whether water diversion is actually a solution to China’s water crisis.

Such water diversion makes northern China dependent on water from the South. It is not a sustainable solution for China’s growing thirst. Instead, alternatives such as raising water prices, implementing better regulations on agricultural and industrial water use, and installing water conservation infrastructures are necessary to tackle shortages. Due to fear of social unrest, the Chinese government is making little progress regarding raising prices. However, over the past decade, the government is pledging capital for the conservation of water quantity and quality. As Chinese cities continue to increase in size and thirst, it is uncertain if future water crises on a megacity scale will be prevented.