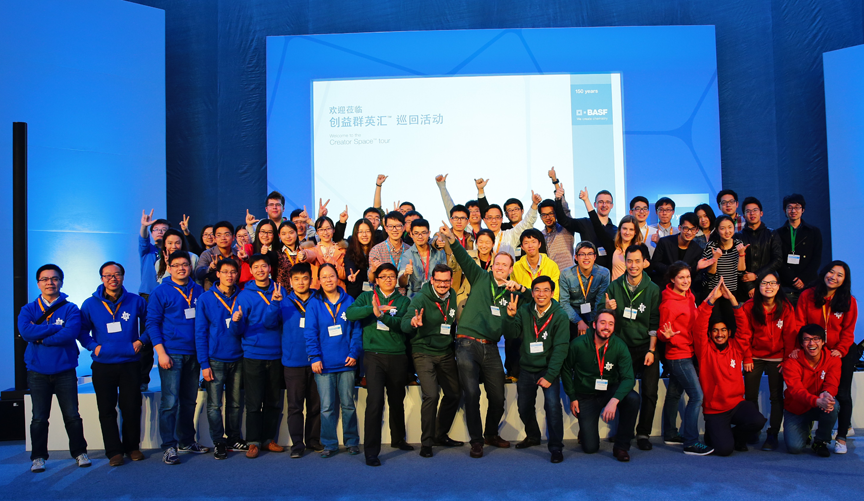 Last week, As part of BASF’s 150th anniversary program in Shanghai, BASF hosted a 24 hour sustainable transportation creatathon involving teams from 7 of Shanghai’s universities. With the goal of the event to inspire the teams to create APP-based solution that would help urban residents make better transport decisions.

With China’s struggle with smog, energy security, and traffic conditions becoming a big concern in many cities, the students were inspired by speakers from BASF, BMW, and Autodesk to think out of the box, find ways to engage commuters, and develop some code that would ultimately bring a solution to China’s cities. Cities that are expected to add another 300 million residents by 2025, and could potentially add the same number of cars.

Mentored by world-class experts from BMW Designworks, Autodesk, BASF, as well as entrepreneurs from Collective Responsibility, Arup and Techyizu, the students produced a lot of creative ideas, many with high commercial viabilities.

One team from Tongji proposed a car-sharing APP aiming to solve the problem of getting a taxi after a concert. Another team’s design involved encouraging more white-collar workers to take public transport by embedding a breakfast ordering mechanism on buses via QR codes. The team from Eastern China Normal University won the first prize with an APP-based solution called “Carbon Coin” – a mobile platform inspired by the carbon trading system where individuals trade carbon savings and then redeem them as “currency”. To take the idea further, the group will work with BASF to refine their designs and make the APP more commercially viable.

For us, and our client, the importance of the event could not be overstated. With many Chinese become increasingly aware of sustainable public transportation, and large investments have been made by all levels of government municipal, provincial and national governments, developing user focused solutions are still needed. Solutions that are not just emotionally aligned to the challenges we face, but offer (commercially) viable alternatives to car ownership.