According to the UN Sustainable Development Goals (SDG), providing widespread sanitation is one of the world’s most urgent challenges. Although sanitation is considered a basic human right, 2.5 billion people, almost 1/3 of the world’s population, lacks access to clean and functioning toilets. This challenge poses significant risks to public health; spreading disease through untreated human waste, such as cholera, diarrhea, dysentery, hepatitis A, typhoid, and polio. The problem also contributes to significant societal problems – especially for women, children, the elderly, physically challenged individuals, and the underprivileged living in rural and urban areas.

Sanitation in China: Progress Made and Challenges Ahead

While the problem is a global one, more locally China is yet to achieve full scale provision of sanitation, with 24% of Chinese people lacking access to decent toilets. This is not to discount the incredible advances in countrywide sanitation that China has made over the last 30 years.  In 1993, only 7.5% of China’s population had access to basic sanitation facilities and by 2014, this number increased to 76.1%, achieving its Millennium Development Goals (MDGs) goal one year early. 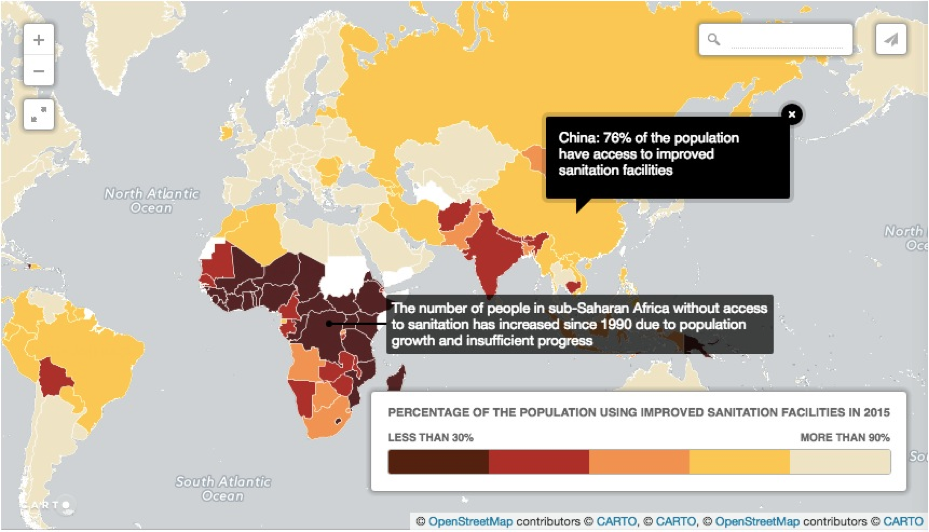 But despite this progress there is still lots of work to be done. When looked at on a more localised scaled this issue is clearer as the majority of communities lacking sanitation facilities are located in northwest China, where water scarcity and poverty remain some of the biggest challenges.

It is, however, not a challenge that is just isolated to the remote rural areas of the country, but one effecting the country’s cities as well. While China’s rapid urbanization has created considerable wealth for its populations it has also led to increased inequality and the number of people in urban and rural areas without clean access is growing. In fact, the number of individuals without access to basic sanitation in urban regions of China went from 3% to 6% over the past two decades. Great burdens are now being placed on the aging infrastructure and sewage systems of the country’s cities, as more and more individuals flooded to the cities with the hope of capitalising on the economic boom.

In response to this, in 2015, President Xi Jingping inaugurated legislation known as the “Toilet Revolution”, with the goal of improving life standards in rural areas and the service standards in the country’s tourism industry. As part of the China’s 13th Five Year Plan, the State Council aims to reach 85% toilet accessibility in underdeveloped regions, as well as 90% accessibility in developed regions by 2020. In addition to the government’s solutions, solutions from the private sector are in high demand, and represent an opportunity to tackle the problem through a profit driven model via selling to the “bottom of the pyramid”.

Hackathon: A Search for Solutions

With this in mind, on November 18-19, 2016 in Shanghai, Kohler, the world’s leading bathroom brand and Collective Responsibility will jointly host a 24-hour hackathon, where six university teams will look to design and develop a new and innovative “off-grid” toilet (a toilet without connection to water, electricity and sewage systems,) kick-starting a solution for the many in need.

Participating teams will engage with leading experts and executives from public health, NGOs, engineering, and design sectors. While receiving one-on-one support from mentors throughout the ideation and presentation process, teams will also have the opportunity to present their proposals to senior industry members.  You and your team will work together to innovate for impact, drive social change through design, and work with leading firms to launch a brand new product, helping millions in need.

This article was written by Kendall Tyson and Yue Cao, Research Analysts at Collective Responsibility.