From supporting marriage equality to climate change, corporations are taking an increasingly prominent public stand on political and societal issues. While the risk of doing so is enough to keep some companies out of the ring, those who decide to take a stand are becoming stronger from the inside out.

Decades of academic and market research show that consumer and employee trust, identification, and affinity for a product or firm increases alongside a firm’s transparency – ultimately leading to less turnover and higher profit.

However, the September 5, 2017 announcement from MARS – to invest $1 billion USD to be “Sustainable in a Generation (SiG)” – raises the bar on corporate responsibility to corporate citizenship.

The SiG plan is impressively comprehensive, as it addresses people, planet, and business sustainability challenges throughout each of MARS’ sub-brands’ supply chains. SiG includes everything from advocating small-farm initiatives and supporting gender equality, to improving the carbon footprint of logistics and energy sources, to marketing responsibly and food safety.

Stating that “sustainability is backed by science,” MARS claims its motivations are not political but rather a moral imperative to do “what’s right.”

The plan covers three “ambitions”, healthy planet, thriving people, and nourishing wellbeing.  All important issues, ones that can be directly linked to the U.N. Sustainable Development Goals, and are further defined by issue-specific topics and goals.

Interestingly, while (re)launching a sustainability strategy and plan are nothing new, Mars specifically sets out three reasons for why their plan is different than the rest,  as stated on the SiG landing page:

To kick off the new strategy, on September 12, MARS’ premiered its first SiG campaign called “Winds of Change,” which put their beloved M&Ms front and center. The messaging and content of the new campaign signals that MARS is following through on SiG in a very intentional, social-consciousness way. This is the era of the Corporate Citizen, and MARS has a lot to teach us.

This campaign is a master class in corporate identity – as it gets the consumer to not only personally connect with the company, but also to link the finished candy product with how it’s made. Through ‘Winds of Change’ MARS gives itself a relatable face, enticing back-story as well as a primary, sweet, characteristic.

Here’s how they did it: 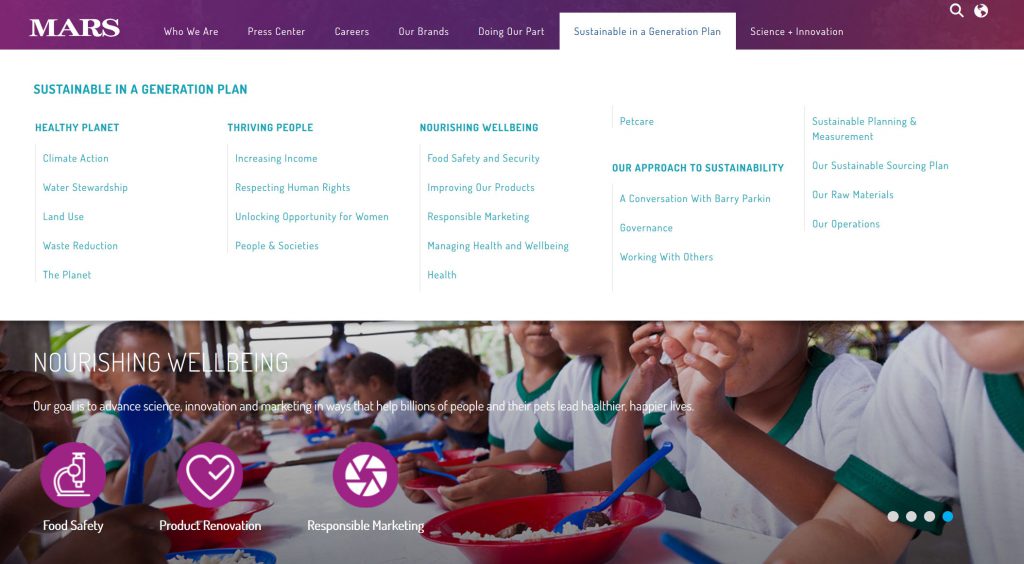 How MARS got here, and how you can too

In 2016, Mars announced it had fallen 11% short of its “100% of renewable packaging by 2015” target, and its CSR reports show that the company struggled to uphold many of its green initiatives from 2011-2013. Over the past year, MARS has done a lot of work to more than compensate for this setback. Here are four lessons to learn:

According to the “Sustainable in a Generation” plan website, MARS has been reducing its greenhouse gas emissions for over a decade through investments in renewable energy and addressing waste issues.

MARS’ 2014 “Principles in Action” report details that a lot of MARS’ sustainability work began from the supply chain up.

Let’s look at the water. In 2009, Researcher Brad Ridoutt published in the Journal of Global Environmental Change that a small bag of peanut M&Ms required 52 gallons of water to produce. From 2007-2015, MARS has reduced the amount of water needed annually by 18%, and aim for an improvement of water efficiency of 15% by 2020, through efforts including rainwater harvesting technology. Such work will lower MARS’ negative environmental impact at cocoa bean and peanut harvest locations and at the factory, as well as water waste throughout the supply chain.

Many sustainability-minded corporations have CEOs leading or, at least, reflecting the company’s values. MARS is no different. While all the press releases have CEO Grant F. Ried at the helm, it is worth noting that MARS’ bench is comparatively deep. He isn’t in this fight alone.

By separating the nuances of developing, executing and auditing sustainability initiatives around the company, MARS is not only investing in its people, but is also implementing an internal series of checks & balances to achieve best practice.

Innovation is key to executing the SIG plan. For this, MARS has called upon many experts. From NGOs working on everything from chewing gum disposal to human rights, MARS has extensive networks and feedback mechanisms.

For instance, to reduce the environmental impact of product packaging, MARS’ established collaboration with Ellen MacArthur Foundation’s New Plastics Economy Initiative. This partnership is notable because the New Plastic Economy Initiative imagines a world were plastics, even wrappers, never become waste. This sort of partnership shows that MARS is thinking beyond its current path and welcoming new ideas and solutions.

MARS’ SiG plan didn’t happen overnight and it wasn’t without steps backward. However, what makes the SiG plan unique is MARS’ resilience and high success rate for meeting its own benchmarks.

Setting realistic goals motivates change and improves the likeliness for long-term success. To begin making better goals, undertake a thorough and honest assessment of current operations, highlighting points for improvement. Then, follow the S.M.A.R.T. acronym when making goals: goals should be “specific” “measurable” “attainable” “realistic” “timely.” Working with external experts is always helpful when auditing current practice, setting new goals and executing the strategies to reach these goals. Remember – the path to sustainability is full of helping hands and innovative solutions.

Stay tuned for more updates on SiG and innovative corporate responsibility practices in China and beyond.