In this post, we continue our insight into the areas of the consumer waste framework in China. Last week we addressed the packaging industry and here we focus on the developing e-waste stream.

By 2020, about 60% of the population in China will live in cities, with 300 million additional residents expected to move into China’s urban centers by 2030. With this population shift comes a dramatic change in lifestyle: from one of subsistence level or an agrarian focus to a consumption-focused lifestyle.

The electronics market is an area of widespread international growth, and in China, over the past ten years, domestic users of electronic goods have expanded to reach 669 million in 2014. As shown in the chart below, given that current city demand atthe household level is greater than in rural regions, over time rural consumption of electronic goods will grow to meet that of current urbanites; thus, the total national demand for electronic goods will increase.

Driven in large part by increases in individual affluence and a range of products with lower entry prices, ownership by consumers in developing nations has far outstripped many of the worlds developed economies.  In addition to China’s market, India, Brazil, Indonesia, Nigeria, Pakistan, and Bangladesh all rank in the top 10 mobile phone markets.

But with this increased willingness and ability to pay the electronic waste stream has also grown, and with the expected rise in urban consumers to the economy by 2030, it can be expected that China waste management infrastructure will see significant pressure in the coming years. 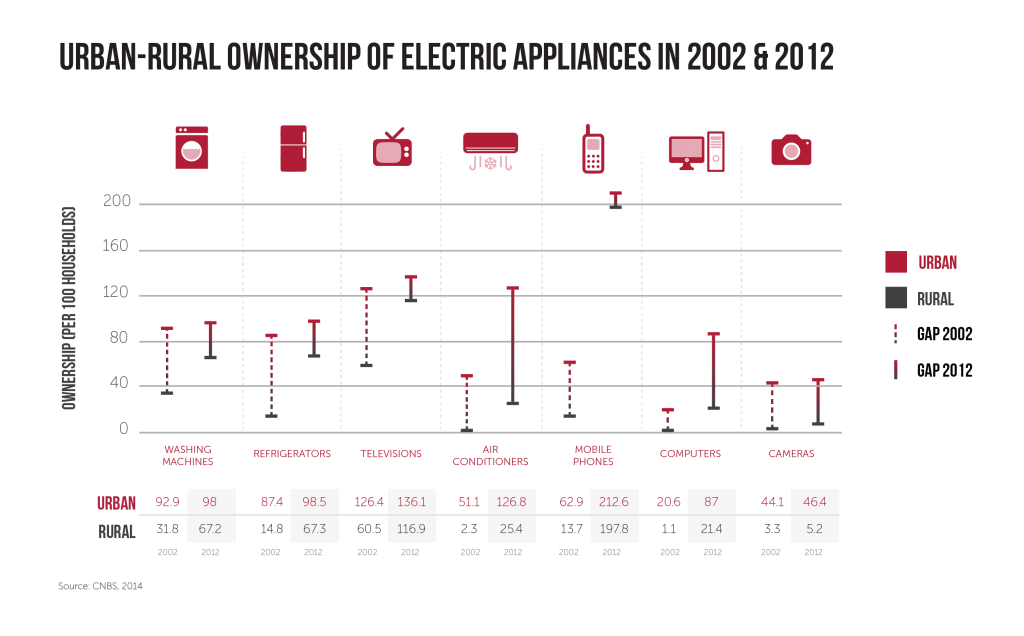 Managing the Social and Environmental Externalities

E-waste streams contain numerous toxic materials and if handled incorrectly can cause severe damage to both the environment and heath of those responsible for their processing. This has long been a problem in China given the high levels of e-waste. Traditionally, imports entering from the US, Japan and Europe have contributed high volumes of e-waste, but reductions have been seen in recent years and it is now largely China’s domestic market driving growth.

Poor management practices that occur predominantly in the informal sector have contributed to high levels of dioxins, and leaching of other toxins into groundwater and soil. Practices that have been well documented in cities like the southern city of Guiyu, a city that is believe to process more e-waste than anywhere else in the world. A city where it was reported by the Guardian (in 2009) that 80% of the Guiyu children have tested positive for high levels of lead in their blood. A problem not confined to Guiyu, or only to Chinese firms, but one that has proved to be a catalyst for change as and led to a number of government pronouncements about increased safety standards and investments. 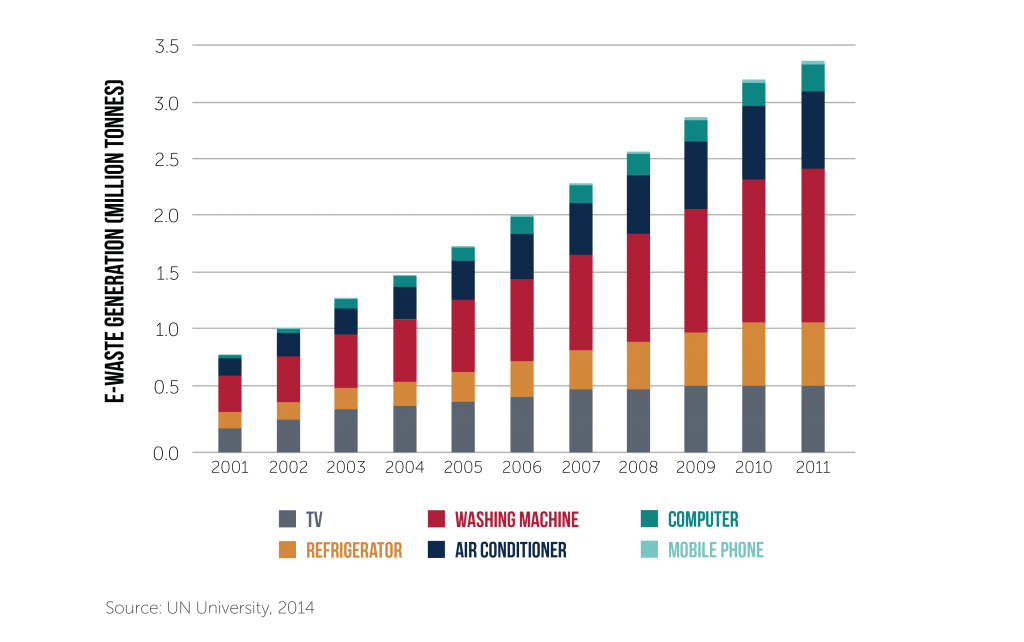 These government investments have largely been aimed at boosting the formal recycling sector and the quantity of waste collected has increased the environmental and social credentials of the industry. One of the most famous interventions that highlight this point was the subsidies that were paid by electronic retailers as part of a program to push white goods sales in aftermath of the 2009 crisis.

During this time, customers were offered a 10% credit for their old electronics. A subsidy that was so popular that created an economy for the waste at such a level that e-waste was being dug out of the landfills. This in turn forced many cities to take hold of (and mange) large sums of waste. Waste that often ended up in warehouses until the processing facility could be built, which in the case of Shanghai was completed in 2015.

Opportunities for design and material recovery

With the changing size and scale of the markets, and the clear need to address this growing issue, we believe that at present there are several opportunities that exist.  Opportunities that in the near term can be implemented, and have an impact at both the front and back end of the value chain.

Design for dismantle and reuse

It is considered that 80% of environmental impacts are determined at the design stage. This can be achieved by optimising reuse, where items are designed for longer life or alternative functions, incorporating more recyclable materials, or through making material recovery more straightforward. A simple example is the use of screws as opposed to synthetic glues. The former results in a more straightforward physical liberation process and reduces the risk of material contamination. This liberation and chemical processing determine the quality of materials that come out of the recovery process. Early input into the design stage of the physical and chemical liberation patterns and current design deficiencies should be commonplace. This is best achieved through interdisciplinary communication all along the value chain, from waste collectors to design engineers.

In response to the rise in domestic waste production, China has accelerated construction of its waste management facilities. This has allowed for the greater capacity of the formal sector. In spite of this higher waste volumes are still processed through the informal sector which is more susceptible environmental harm. China’s predominant form of waste management remains landfill, a purely linear approach to waste management, and much e-waste ends up in them. 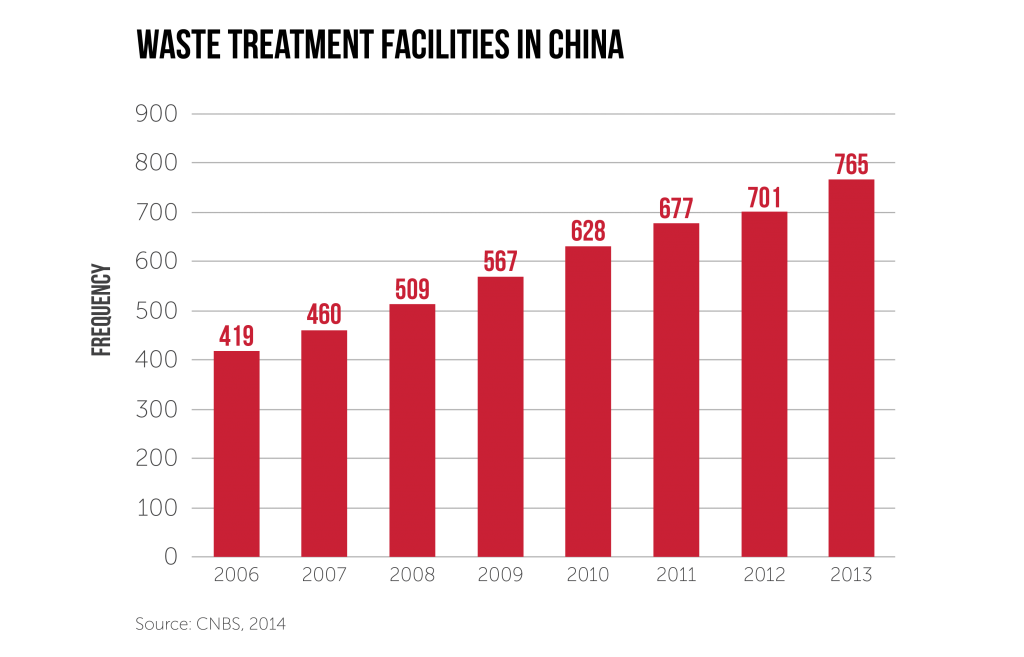 Incineration capacity has increased significantly over the recent years, and although it still remains a fraction of energy production, its percentage contribution is growing. This does not, however, incorporate a truly circular system of reuse and resource recovery and opportunity exist for greater investment in the formal collection and processing sector to better address issues pertaining to resource recovery efficiencies.  This development can come from private companies who communicate and align well with government expectations and ambition.

Given the complexity of technological goods, vast numbers of metals are contained within them, many of which have high market values and as a result, with increase resource scarcity their recovery is becoming more economically viable. This has lead to electronic waste streams being dubbed “urban mines” given the financial potential value they contain, with between 7% – 10% of the worlds gold and up to 30% of the world silver going into electronics. 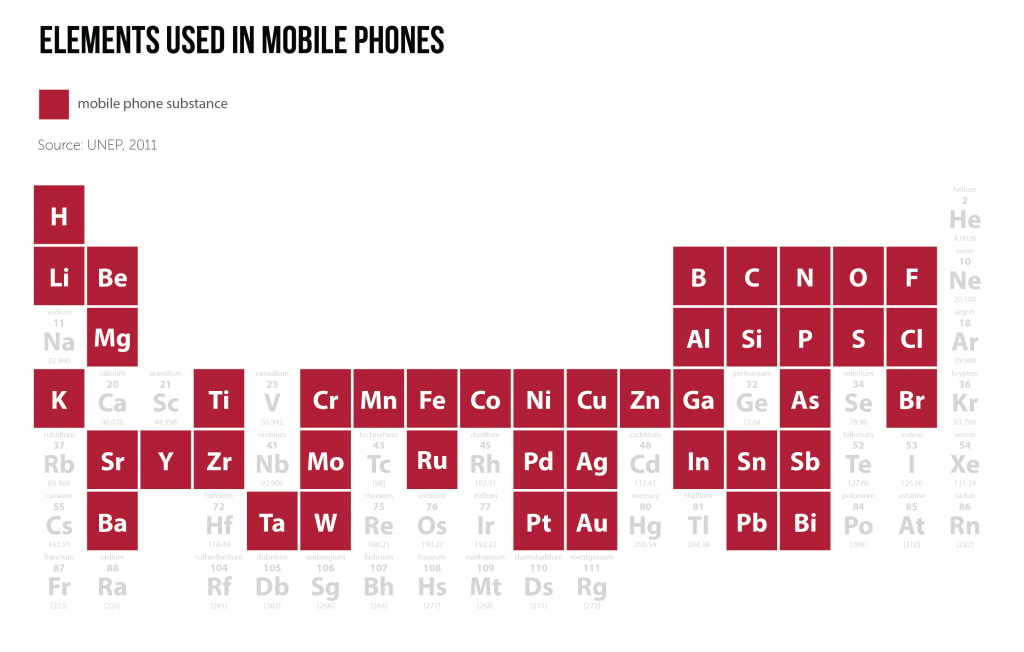 For example, mobile phones contain 43 periodic elements, including platinum and gold, and although the removal of some of these can be practically difficult, as volumes of waste increase and techniques develop the incentive to “mine” for these materials will also.

The importance of stakeholder communication when attempting to create a sustainable waste system cannot be undervalued. For example, waste handlers and secondary resource providers should share information on recovery with product makers to help them iterate on the design. Similarly, governments can communicate and aid this process through the implementation of regulations such as extended producer responsibility (EPR) – this places the onus on the producer to be responsible for the full life cycle of a product, in particular, the reuse and reclamation of resources, such to reduce overall harm. If these relationships are well executed and work towards the same goal it sets the foundations for an efficient waste ecosystem that can increase reuse and recovery, and mitigate environmental degradation.

Given the expected rise in e-waste streams that will come over the coming 15 years, it is clear that without proper management and improvement of current e-waste management systems, China will struggle to keep up. Something that is a known to China’s policy makers, and while many are waiting for improved regulation and enforcement, we see the opportunities for brands to take a leadership position through increased collaborations with stakeholders, improved design, and through investments into formal waste management and material recovery operations.

Particularly in areas where the size of externalities has grown unbearable by local populations, or in areas where greater resource scarcity and rising costs of raw material extraction makes waste recycling and circular development of the waste stream more economically favourable.